I feel like there are times when I forget the power of prayer, but when I am reminded, those reminders are powerful.  I have three such examples which happened throughout my Young Lives Summer Camp experience and I would love to share them with you.

The first situation came up before even getting on the bus.  It was Wed (two days until blast off) and I felt myself getting sick.  By the afternoon, I knew this was going to be an issue; however, I also knew that I needed to muster through. I sucked it up and began the packing process.  I checked in on my girls and reminded them of essentials and to be on time and to get some rest. By evening I was curled up in my bed, truly worried that I would bring germs to these beautiful babies or worst, have to cancel.  Instead of wallowing though I reached out in prayer.  I actually went to social media and explained the importance of healing and asked for a covering of prayer.  By the next morning (and 15 comments of true prayer later) I honestly felt re-energized and ready to tackle anything.  I was so grateful that in the trainings we had been reminded to be praying for our girls non-stop, but to also ask for prayer for ourselves.  It was a great example that in today’s world, prayer warriors can be contacted from anywhere and at all times of day.

The second situation happened on Saturday/Sunday.  There were 15 girls and 13 babies in our group and we had a prayer team praying for each and every one of them, but by Saturday evening, I knew the Lord was really working and campers were personally being faced with some hard things to work through. I reached out to the prayer teams at home to be in earnest prayer for the campers especially as I knew they’d be gathering for Sunday morning services. On Saturday the words of the speaker began to break down thick, heavy walls which in turn enabled us as mentors to help rebuild with God’s love.  By Sunday afternoon cabin time we began to see new young women that were being filled up by the Holy Spirit. Prayers were being answered!  If you don’t know about cabin time then I challenge you to go on a camp experience and find out, because God is so apparent in those moments. 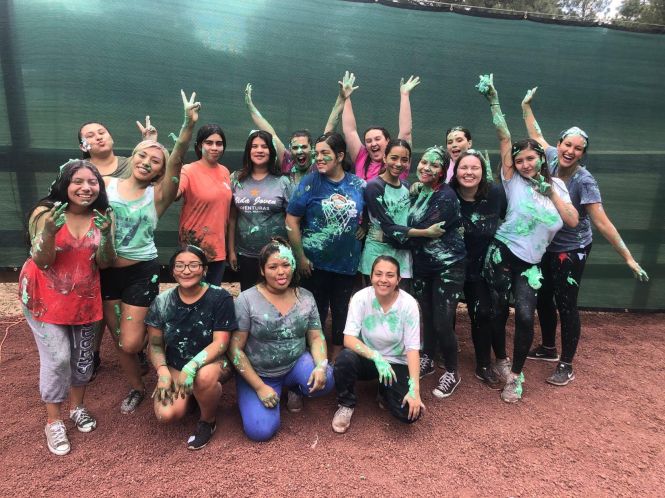 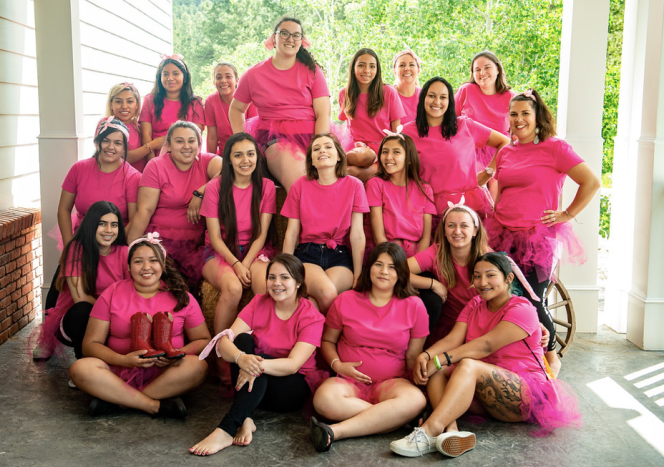 This leads me to my third example of prayer.  In that time of prayer and reflection in the cabin we gave the girls the gift of silence and time to write a letter to God our Father. We as mentors did the same and I have not had such an honest conversation with God in years.  I found myself crying as I wrote down truths and apologies and requests. My requests were not personal ones like a house (although that is on my prayer list) but instead requests to be used by Him. I not only gave Him permission to use me, but I begged for Him to use me.  I verbalized my desire to be a disciple and to make a difference in people’s lives.  I shared my longing to be his instrument and to give me the words to help heal hearts.  I asked to be used in anyway which He saw fit to use me (this ended up getting me into trouble when he chose to use me on the ropes course the next day, but that’s a whole other story).

I was feeling pretty filled up by the camp experience thus far, but my humanity reared its ugly head. Right after seeing God do such amazing things, I found myself crying to another mentor.  In a rare moment of exhaustion, I verbalized my deep ache for some physical example that being God’s tool was worth it.  I had watched at camp as girls cried in mentor’s arms, as toddlers raced to mentors almost as aunts, and as campers and mentors sang together and I was honest in a weak moment of wanting to be affirmed. 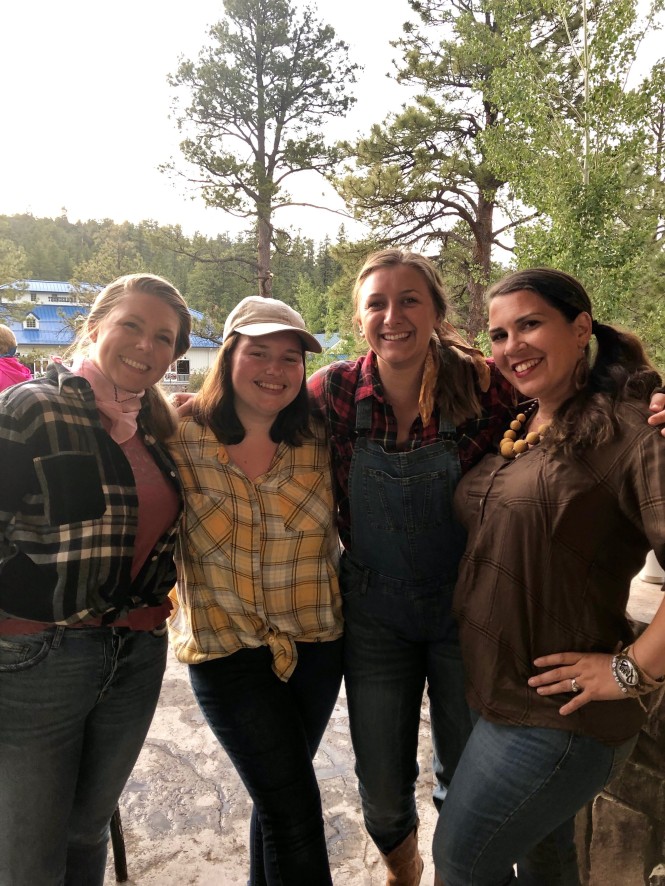 My fellow mentor hugged me and gave me the dignity to verbalize my desires of the heart and thanked me for all I was doing.  I asked if she thought I was selfish and she laughed and said that I was human. She surprised me so much when she prayed that I would get that moment of affirmation which I so wanted and we went back to being there for the campers and their babies.

I never put my desire out there as a prayer request, but it does say in the Bible that where two or more join together in the power of prayer, that prayer will be answered and it was answered on Monday evening.  At our evening time together the entire camp stood outside as the word of God was offered in the form of a Bible.  I can’t go into too much detail, but I can say that as I stood outside under God’s beautiful night sky, I was appreciating His glory and power… when I felt a pair of arms reach out from behind and wrap me into a huge embrace.  One of our campers felt moved to hug me as she heard about the Bible.  I wiped away tears, holding her arms tight, and locked eyes with my fellow mentor and just willed her to feel my gratitude. 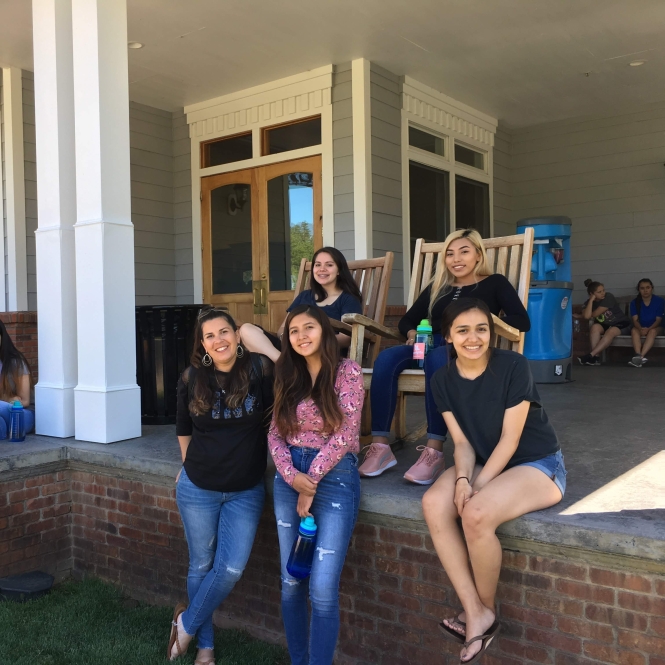 This young mom then whispered in my ear, “do you think we could do one of those things where we read the Bible together and then talk about it? What’s that called?” I literally laughed out loud as I said, “You mean a Bible study? Yes, I would love that.” I reveled in the moment of God answering a barely spoken prayer.  A personal gift which was His icing on the cake of an expertly crafted week.  A week which was filled with so much laughter, food, dancing, singing and fun. A week filled with tears and questions and answers.  A week which ended with three moms welcoming Jesus into their lives for the first time and three more moms reaffirming a desire to walk with Jesus all with their babies at their sides.  A week which led to contacts being shared as moms made new mom friends and as emails were shared to follow up with a bible study.

Now I would like to challenge you, our readers, our support, our sponsors.  Please do not stop praying for us.  I have just shared with you three examples of how prayer was answered. I need you to continue to pray for this group. Pray that these hearts can continue to be filled with the power of the Holy Spirit.  Pray that these moms will be able to withstand attacks from the enemy on their newfound relationship with the Lord.  Pray that we as an organization can continue to serve where there is such a need.  And most importantly, pray on what your role is to be for the upcoming year.  Who knows, perhaps God is preparing you to be a mentor at camp next year.  Pray on it. 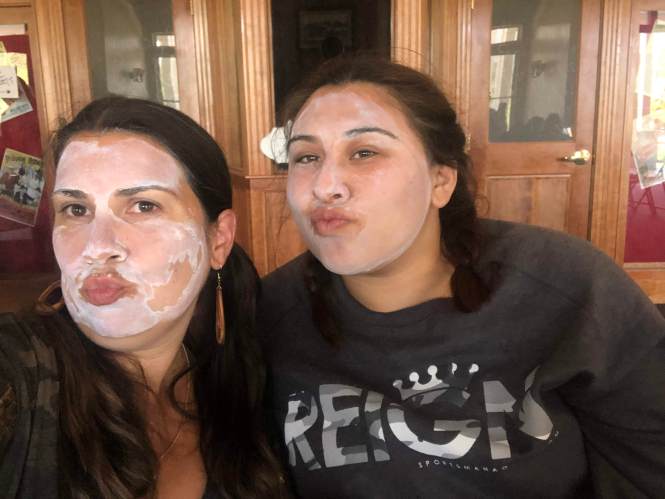