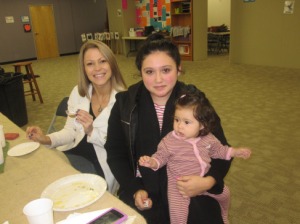 I know that when one gets involved in ministry, that they are supposed to go in with an expectation that it’s not about “them”, but rather the community or people that they are serving; and to understand that the experience may not necessarily be “fun” or immediately rewarding.

When I got involved in YoungLives, I would have certainly said the above out loud… but to be perfectly honest, in my head, I envisioned me getting paired up with a young teen mom who was similar to me in personality. We would naturally hit it off immediately.  She would trust me upon our first meeting because the connection was just THAT strong.  We would hang out and laugh and have fun all the time!  I would walk into her life and fix all the brokenness, set her on the path to success both spiritually and academically and she would more than likely be a huge success in life and have me to thank for it!  This was going to be awesome and fun.

This is not what ended up happening for me.  I got paired up to mentor a young girl who couldn’t be more different than myself.  She is an extreme introvert and seems to lack interest in just about everything.  Each interaction with her seems to be more awkward than the last.  She doesn’t open up to me at all.  She has decided to drop out of school and is not working and doesn’t really seem to care about it.  However she has always been committed to meeting with me, and coming to the club meetings once a month.

I’ve found myself often times asking myself “what am I really doing with her?”  I wasn’t seeing immediate improvement in her life resulting from my mentoring.  This frustrated me beyond belief.  I was supposed to fix her life, and the opposite was happening.  It seemed as though things were progressively getting worse.  “God, what is the point of me being in this girl’s life?”.  Many times I wanted to give up.  I spoke with my leader Myrna, and expressed my frustration, and Myrna asked me if I would still be willing to mentor this girl even if I knew that she would end up “failing”?  This was such a great question that forced me to reexamine “why” I was doing this.  Am I doing this so that I can feel good about myself and say that I am involved in ministry and have fun, or am I doing this to show Christ’s love no matter what the situation, or circumstance, or outcome.

Well, I had my vision (mentioned above) on how “I” would reach this girl.  And God had His.

One night after our monthly club meeting, I was driving my girl home, and I asked her if she owned a Bible, and she said no.  So I told her that I would give her one.  I embarrassingly admit that a couple months of chaos in my own life went by and I never did give her the bible that I promised.  One night my girl and I were hanging out and she said “you never gave me the Bible that you promised”.  I was SHOCKED that she even remembered, let alone reminded me about it.  Keep in mind this girl does not speak unless she is spoken to, and even then, she will barely give you a word or two.

So the next time we met up, I did give her a Bible.  She asked me how to read it. (GREAT question)  I told her I have no clue.  I dog-eared the Gospels and Proverbs for her and said those might be good places to start.  I have to again embarrassingly admit that in my head, I did not think that she would read it.

Two weeks later we had our Monthly club meeting for the month of March.  The meeting was set up with an Easter Theme since Easter is right around the corner.  Set up on each table was a basket with eggs and in each egg there was some candy and a bible verse that one of the volunteers so thoughtfully put together and prayed for.  Vanessa opened her egg, and received a verse out of Proverbs.  When she opened it she said with excitement “Oh my gosh, I have been reading these!”  I was not only shocked to find out that she actually HAS been reading the Bible but I was also shocked to hear any form of excitement come out of her mouth!!  Later, each girl received a card that was written specifically for them by a group of women from Rockharbor Huntington Beach.  This group of women have never met the girls, but got their names, and prayed for them, and wrote them a very sweet message.  When Vanessa opened her card, she was so excited to see that on the very front of the card was again another verse from the Proverbs!  Later that night she sent me a text message and told me that she told her child’s father about the Proverbs.

God is clearly working in this girl’s heart despite my own doubt and outside of my own expectations.  No- I am not the glorious hero in this girls life like I originally envisioned.  No- I am not seeing mountains moved after every time that I meet with her.  Rather, in the 6 months that I have known her, and have consistently met with her (no matter how awkward it was), she has picked up the Bible and read some Proverbs and is talking about it with people in her life.  Totally worth it!!!!