The first time I went to camp, I was a teenage mom with a six week old! I experienced so many different emotions at that camp and it’s where I truly decided I was entering an everlasting relationship with Jesus.

Last month I attended YoungLives camp for the second time.

On the long bus-ride to camp, I remember looking out at the mountains we were passing through and studying all of the sediment that made-up the mountains. My immediate thought, which became my prayer for the week was this: Lord, you placed every single piece of gravel and rock on these hills. Every plant growing here holds a purpose in your kingdom. Your creation is so beautiful, God. Of course you also placed each of these young moms, including myself, in our current situations to fulfill our purpose in your kingdom. Thank you so much God. On top of all of this, I was able to bring my now TWO year old along with me!

I returned as a Junior Leader. This trip to camp was so different, and such a week of reflection for me. I met moms that were in similar positions and had similar struggles that I did during my first trip to camp. I was able to relate to them, listen to them as they opened up their hurting hearts, and most importantly I was given the opportunity to give the moms a glimpse of what God’s love looks like. We as leaders demonstrated this in so many ways, including serving the moms first at meals, making sure that the moms and their kiddos showered first, watching babies in the cabins while moms experienced free-time activities, and more. 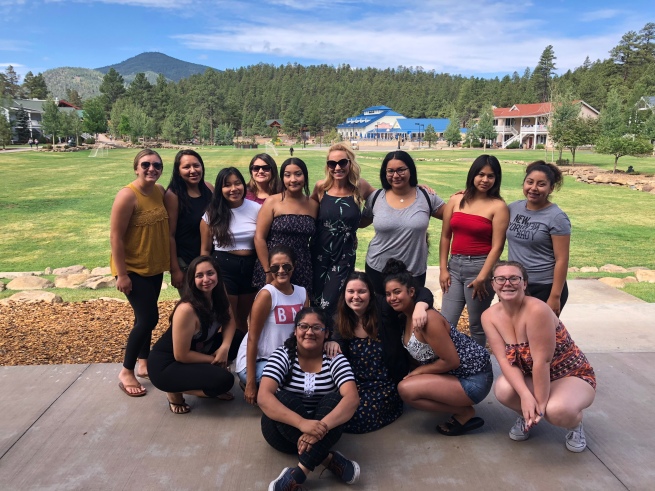 There were moments where balancing being a mother and a leader seemed impossible, but those moments only turned into more opportunities for me to demonstrate my faith in Jesus Christ to these young moms. I was given opportunities to be very raw and real with them about mothering a toddler. Some days are so hard and even frustrating, but with Jesus I know that these days are so worth it. I was able to demonstrate that yes, leaders will fail you. There were moments when I had to put my job as a mother before my job as a leader, because nobody on this earth is perfect except for Him.

Going back to camp as a leader is something that I will never forget. Getting to know each mom and pieces of their stories was incredibly impactful. Being on the other side of YoungLives was also eye-opening to see just how much our leaders and volunteers do for these moms and their babies. I am looking forward to stepping into a mentoring role with some extraordinary teen moms one day to share the love and acceptance of Jesus that was shared with me!

At 7:15 am on Monday I pulled in to the local Dunkin Donuts parking lot to meet up with four local teenage girls that I had never met before. Their parents were dropping them off so that they could catch a ride with me to Lost Canyon YoungLives Camp in Williams, AZ. We were all headed to camp to volunteer with the Childcare for the week. We introduced ourselves, gathered in a circle for prayer – lifting up the week ahead, praying for ourselves, the teen moms and babies and leaders that would arrive on Tuesday. We were excited, curious, energetic, and ready to hit the road!

It didn’t take more than a few minutes in the car with these girls to figure out that they were really special. Here they were, giving up a week of their summer break to go serve amongst their peers that had babies. They each had such respect for these teen moms that were juggling everything they themselves juggled AND a baby! They couldn’t wait to get to camp, meet them and help out with the babies.

Seven hours later we pulled into camp to the biggest celebratory welcome EVER! Tucked into the mountains of Arizona, you enter into an amazing setting of cabins, lodges, zip lines, a small lake, horses, beautiful flowers, trees, blue skies, huge white and gray clouds…simply breathtaking and not what you would imagine a youth camp looking like. But then THE welcome!!!! As we drove across a small bridge lined with summer staff and work crew all whooping & hollering “WELCOME!!!” and high-fiving us through our open windows – we were blown away. One of the girls whispered to me, “is this all for us?!” We were given rain jackets, tee shirts, our week’s schedule, our name badges, room numbers, ice cold drinks, and snacks. We were given opportunities to enjoy camp experiences (I chose a horse back ride) and get rested before the arrival of teen moms, babies, and leaders the next afternoon.

On Tuesday we welcomed in the buses of campers with the same enthusiasm we had been shown. What a beautiful sight watching these brave young women step off those buses with their babies. For some of them, it was their first time to leave home with their baby knowing they were fully responsible without family members to help. For all of them, it would be a week of being treated with overwhelming kindness, love, good food, and camp experiences that would stretch them physically and spiritually.

Childcare helpers were introduced to the little ones on the basketball courts that had been revamped into a County Fair. Music, balloons, games, ice cream…so much excitement…and trepidation…and concern. We knew we were strangers to them, not yet to be trusted. Before long, though, we were given the chance to love on and care for the littlest ones while the moms were loved on and cared for by the leaders, program directors, and staff.

In Childcare, we are with the little ones for five days…five to seven hours a day. We are there to play with them, love on them, protect them, help them to feel safe and secure. But the bigger picture is…we are with them so that their mamas can redeem some carefree time. So that their mamas can be given a message of hope. So that their mamas can see that by God’s love and grace, others want to know them, want to walk alongside them, want to help fill in gaps that they may have. Throughout the week we watched from the various camp nurseries lives being transformed. Hearts being softened. Mamas being encouraged. Jesus setting people free from bondage, guilt, shame, fear. These brave and courageous moms becoming braver. Confidence being built. Walls being tore down. Laughter, smiles, dimples and giggles abounding. Tears that had been pushed down were released. Burdens were being shared and becoming lighter. For some, decisions were being made to allow God into their lives.

After saying good-bye on Saturday morning to the little ones, their mamas, the leaders, and my co-workers in the nursery I was back in my truck with the four teens that drove with me. We were definitely all exhausted but far out-weighing the tiredness, was the extreme gratitude and joy we had for being at camp and watching girls experience “the best week of their lives”. That I got the opportunity to be a part of Summer Camp week is a priceless gift. Lucky me!

What an amazing day! Our 6th Annual YoungLives Pancake Breakfast & Craft Fair Fundraiser. Though we were up extra early, even with kids, it was a blessing arriving to Lake Park bright and early to see so many setting up tables, laying out their crafts, and bringing their art to life, all in the name of love. While the men, mostly, were making sure stomachs would not be left empty by way of a five dollar breakfast consisting of pancakes, sausages, juice and coffee, we saw all sorts showing up to help make the day memorable.

As kids filled into the bounce house, or cashed in for a scenic hay ride around the front of the boy scouts cabin; jewelry, cloth, clothes, flora, paintings, photographs, oils, dolls, and freshly picked tomatoes and even eggs from the garden, traded hands. 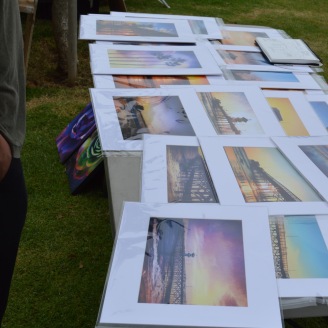 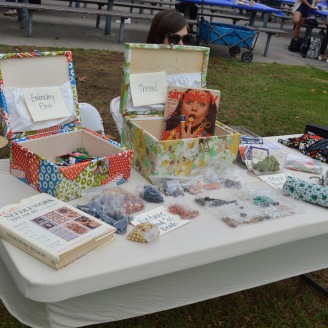 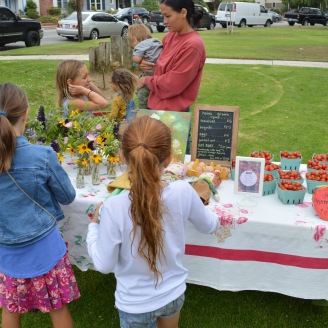 Not only was the day a success because we were able to raise money for the cause of sending local teen moms and their babies to summer camp, but everywhere you looked, the community was at work, doing their part, smiles on faces and all.

While my family and I are engaged through out the year in so many special YoungLives events, this one sits atop our list as a favorite. There’s something about being out in a park, where people gather, simply eating food, connecting, and yes I can say it, pouring out love.

As the early morning fog began to withdraw there must have been hundreds who made their way out. At one time two truckers, and their 18 wheeler came by for a meal, probably due to the many kids, my son being one of them, dancing atop the brick built in bbq yelling at passers by to, “Come and get yer pancakes!”

Writing this and looking back, as one who is involved in the process from start to finish, seeing all the emails, phone calls, collecting required permits, along with the buying and creating that goes into the day, I can say in all honesty that as soon as the last table is folded, and even as the last car trunk is slammed, you drive away from Lake Park on that day a little let down that you have to wait a whole 365 days until we all get to do it again.

The blessing? That YoungLives is only able to do so much, because so many, have given so much. Through this event, many teen moms will be leaving this coming Tuesday for an unforgettable week of camp for even more encouragement and love.

With much love, Tracy Sumner