First I would like to take the opportunity to tell you how blessed  I am by meeting so many sweet people in the last years while serving at Younglives.  My name is Maria Randall and I serve at the Santa Ana Club.  I have served in different roles in the last 4 years.  I first approached Myrna in search of  serving  a Young Moms ministry in the City of Santa Ana.  Myrna had shared with me her vision of starting a Club in Santa Ana.  I was very happy that  she also had a vision of seeing a group started in the  City of Santa Ana.  I have read  that  the City of  Santa Ana is one of the leading cities in the country of Teen pregnancies.  My heart  goes out to the young teens that have very limited resources and support. 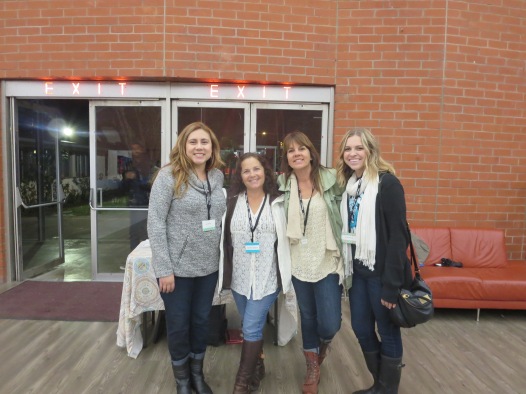 Maria,Cristen,Laurie, and Ellen at the first Santa Ana club!

When I first started as a  volunteer I would drive girls  to the Huntington Beach Club  at Calvary Chapel Refuge.  I was able to meet new teens and their babies.   It was so  nice to develop relationships with some of the  girls that I drove to Club.

By the second year that I was  volunteering I was given the opportunity to mentor a teen mom named Maria.  Maria had moved out of the area and later I mentored a new Teen mom named  Georgina.   I have become  very good friends with Georgina and also her family.   We continue to hang out often and we  have also attended church together.  I have seen  Georgina grow to a Young lady and I have helped her in Prayer, support and guidance.
During my 2nd year with Younglives, I also had the opportunity to help in starting the Santa Ana Area Campaigners.  I  opened my house and we started our first Campaigners meeting,  Campaigners is a smaller group setting where  Teens and volunteers want to grow closer to  God and we have bible study and fun activities.  During this year the Teen moms from the Santa Ana and Costa Mesa area grew closer together along with the  volunteers.   I also became friends with a handful of Teen moms and have opened my home to them  for small gatherings and  movie nights.  During this year I also helped in coordinating a Spa day for the girls.

By the third year serving at YL, Myrna asked me to coordinate the first  Christmas club at the Yost Theater in the City of Santa Ana.

Christmas 2016 at the Yost Theatre

This was a very big task but I relied on Jesus to iron out all of the details.
For God nothing is too Big and the event was a success.  I also grew in my role as I served in this ministry. My love for the ministry and the Young Teens of Santa Ana grew as I  saw first hand some of the struggles a lot of our Teens are facing in  our surrounding cities today.
In January of 2016 the first Santa Ana Club was planted  at Newsong Church. Myrna asked me to be the coordinator for the remainder of the year and I gladly stepped in to serve.   During this year I was also able to visit a High School in the city of Santa Ana and spend some time with some of the Teen moms and dads during their lunch time. This year I have had the opportunity to use some of my crafting skills to help out in decorating the Santa Ana Club.
When I was asked to write about my involvement and volunteer work with YoungLives, Initially  I didn’t know how to write it because I didn’t want the blog to be about Me. I want to make sure that when people read my story that they would see God’s plan being accomplished.
In 1992  I was 17 and I was a Teen Mom.  I grew up in a small Hispanic community a lot like  the city of Santa Ana.  I was brought up by my  loving parents.  My mom is a prayer warrior and she handed down her  belief in prayer to all of her 7 children. I also grew up in a small 1 bedroom house. Pretty  similar to a lot of our teen parents living situations today. My parents worked hard and have always wanted the best for our family. As I look back and think of my young life as a mom, I would have never imagined that God would have used my life in order to serve with a ministry for young parents. God restored and truly changed my life.  As humiliating  as it was to be a teen mom 25 years ago,  you can now see that God had a plan and a purpose in my life.
If you are reading this, and you are considering in joining this ministry,  I can tell you that our life is a  beautiful  vessel  and Jesus uses it fulfill his plan ( 2 Timothy 2:21).  If you are a young parent reading this, I hope that you are encouraged by reading this and  you see what an answered prayer looks like. My mom prayed for my safety, protection and that I would become a Godly Mother and Wife one day. I believe that my mom got her prayers answered.
God is just looking for an open and willing  heart, my life has had many twists and turns, but He used me with no skills and no training.
I treasure all of the friends and wonderful moments at Younglives.
-Maria Randall