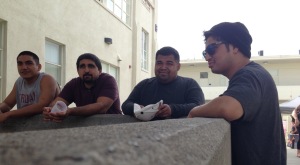 Yousef and some teen dads at church!

I am amazed to see how God has worked in YoungLives North OC over the last 3 years. One particular thing that has completely taken me by surprise is seeing teen dads start regularly attending YoungLives  alongside the teen moms. We didn’t expect this when we started a ministry for “teen moms” but we quickly realized that it was an open door from God, telling us to enter what was before us and mentor these teen dads. Over the last 3 years, we have seen many teen dads become men, with jobs and responsibilities, and fathers, desiring to provide for their families.

One story that stands out to me is about the boyfriend of a young girl that my wife mentors. After getting to know the girl and her baby, we asked about the baby’s father and found out that he was in juvenile hall. When we asked why he was there, she told us it was for gang related issues. Over the next 2 years, the boyfriend was in and out of juvenile hall several times and even missed his baby’s first two birthdays. But he stayed in touch with his daughter’s mom and heard about her involvement with YoungLives and that she and their baby had been attending church on Sundays.

After the last time he was in jail, my wife and I had the opportunity to meet this teen dad (at the time he was 17 years old) and we invited him to come to church with us. At church, he saw his daughter run up to people she knew, hugging them. Seeing that so many people knew his daughter by name touched him deeply. And now, for more than a year, he has attended church every Sunday!

This teen dad wanted to be in his baby’s life every day, and now he wakes up to her every morning, knowing that he will be a loving and supportive father to her. A few weeks ago he got his first job. And I’m so proud of him! He is working hard and getting a new start at life with his family. I know that the future will be bright for all three of them!

“‘For I know the plans I have for you’, declares the Lord. ‘Plans to prosper you and not to harm you. Plans to give you hope and a future.'” -Jeremiah 29:11